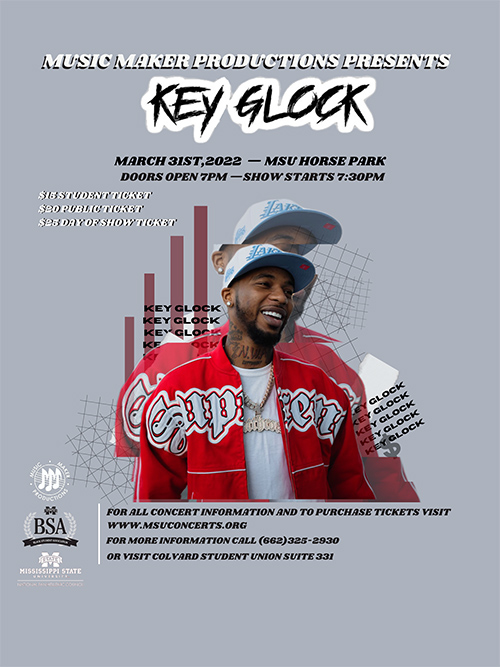 Tickets for the 7:30 p.m. event go on sale today [Feb. 4]. The MSU student entrance fee is $15 and the general public can attend for $20, with the price increasing to $25 on concert day. Tickets are available at www.msuconcerts.org or in the Center for Student Activities, Colvard Student Union Suite 314. Doors to the event, which is being announced with a parental advisory due to explicit content, open at 7 p.m. at 869 East Poor House Road. Opening for the night’s headline artist is DJ Macho, also known as Zachary Mikell, an MSU marketing major from Jackson who DJs men's and women's basketball games at Humphrey Coliseum.

From Memphis, Tennessee and a protégé of the late, chart-topping rapper Young Dolph, Key Glock has experienced one of the steadiest climbs in the rap music world over the last few years. Glock released the original “Yellow Tape” in 2020, which peaked at No. 16 on the Billboard 200 and included contributions from music producers Southside, Kenny Beats and others. “Yellow Tape 2,” which has generated the singles “Toolie,” “Ambition for Cash” and “Da Truth,” showcases Glock’s evolution as a rapper and, at times, features him alongside what he has labeled his alter ego, Glizock. Album producers include Tay Keith, Juicy J, Sosa 808 and Budda Bless.

Part of the MSU Division of Student Affairs, Music Maker Productions works to provide contemporary entertainment for the university and Starkville communities. For more information, follow on Facebook @MSUConcerts, Twitter @Music_Maker, and Instagram and Snapchat @msu_mmp.